Konnichiwa minna-san! It's been a while since I last posted XDD
Just wanna tell you that I'm going to school now and will be very busy with school works. That is why I just want to let you know that... the GazettE will be releasing a new single called REMEMBER THE URGE on August 31st.
As always, there will be two types:
And, they will also be releasing  their fifth album called TOXIC. 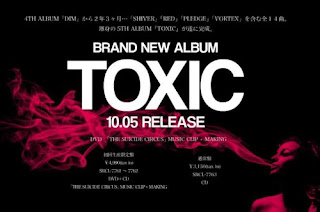 Plus another live tour VENOMOUS CELL: 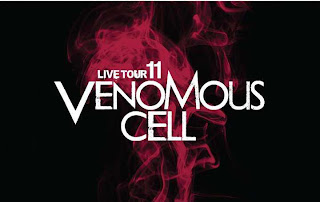 What a very busy schedule XDD Let's just hope the best for them ^^
Sayonara minna-san ^^
Posted by Ka-chan at 3:56 PM No comments:

My opinion-
I've known this band when I opened my friend's DA account. I saw a group called D'espairsRay that she's watching. So yesterday, I bought two of their CD: Immortal and MIRROR. I've fallen in love with them when I heard DAMNED this morning. So I liked their official Facebook page. And how surprise when the GazettE's admin posted this evening that D'espairsRay has disbanded... I felt rather guilty to know it.
Let's just hope that our favorite VK band won't disband.
Posted by Ka-chan at 10:36 PM No comments:

Mata aishiteru to itte arifureta kotoba
Todokanai todokanai kimi no senaka
Mou sakenda negai mo yagate niji ni nari
Hikari ga sasu made
ENGLISH
The umbrella laid without being raised
The sounds of the rain were dancing a waltz
Because i want that feeling on the shoulder, I closed my eyes

To the extent that it's cold, the temperature I felt was surely
Like the blue flame burning in my chest

Say I love you once more
Those common words, I can't convey, I can't deliver, towards your back
The wish I already cried out too, was washed away by the rain, until it becomes forgotten

The roses had stopped falling, hadn't they
The sweet pain left in the memories
There aren't supposed to be things that are "late"
Because I advanced forward again

I forget the fragance left in my palm, but before that
I'll rewrite even that plot

Again, if I wished for it, I'll get hurt, the tears won't stop
I know, I know, my weakness
But the fact that I've touched you, and even the passed seasons, I don't want them to be meaningless

You know, I can't count the things I received from you
At the very least I want to be by your side, in my memories

Say I love you again
Those common words, I can't convey, I can't deliver them to your back
The wish I already cried out too, finally becomes a rainbow, until the light shines on it

For you A9 lovers, good news cause BLUE FLAME has been released ^0^

And for you GAZEROCKERS, it is Uruha's birthday in Japan so let's start celebrating it and spread the good news!! ^^
He's turning 30 today (and tomorrow since the time is different... XDD)

Congrats to Alice Nine and Happy Birthday to Uruha

Hey Gazerockers!! It's 2 more days until our lead guitarist's birthday! ^^
Have you prepare your gifts yet? Well, I have :)
Stay in touch with my DA account to find out more about my "sadly I can't give it to him" birthday gift: http://ka-chan34.deviantart.com
Posted by Ka-chan at 3:00 PM No comments:

the GazettE - Filth in the beauty

the GazettE - The Invisible Wall